Created by Gadgetboost.com, this new dock extender adapter eliminates the need to constantly peelan iPod or iPhone from its case or bumper to use with a docking station or speaker system.

San Diego, CA, November 03, 2010 -- GadgetBoost.com is excited to announce the DockExtender Boost iPhone, iPod, and iPad dock extender and adapter creating one of the most useful products for the iPod (all models), iPhone (including iPhone 4) and iPad that customers have been looking for: The Apple iPad iPhone iPod and the DockExtender Boost in Black. This new dock extender adapter eliminates the need to constantly peel an iPod or iPhone from its case or bumper to use with a docking station or speaker system. 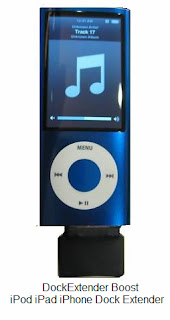 Plug and Play is back. Customers can just plug in the adapter and extend the iPad, iPod and iPhone dock. All 30 pins are passed through, so any other iPod or iPhone features work and it even works with the OtterBox Defender, Element Vapor, Ballistic Hardcore (HC) and for the iPhone 4 Bumper with a bumper.
.
Most popular uses:
*    Extend an iPhone 4 with the Bumper on
*    Instantly attach an iPod Nano 5th Gen to a Dock
*    Use an iPhone without removing the Element Vapor case
*    Quickly dock an iPhone 3G or iPod with OtterBox Defender case on
*    Effortlessly extend an iJet remote
*    Allow for iPhone and iPod docking to a clock or speakers with a narrow base
*    Replace a long iPhone dock extender cable
*    Use an Apple iPhone 4 Universal Dock with the Bumper on
*    Solve the problem of iPhone 4 bumper having a tight opening around its access dock
*    Connect a USB cable to an iPhone or iPod dock
*    Eliminate the frustation of connecting your Ballistic Hardcore case

The DockExtender Boost is a winner - A customer's story:
"I became very frustrated with using both my iPod Nano 5G and my iPhone. It started with my iPod Nano. I was excited about the new product (having upgrade from the 3G) and tried to dock it on a speaker dock I owned for years. The dock charges the iPod and then you connect the audio out of the iPod to the dock with a small 3.5mm male to 3.5mm male cord. Unfortunately, I was unable to access the iPod's audio out because it is so close to the 30 pin connector. I determined that the only way I would be able to use the speaker dock would be if I could somehow extend the dock on the bottom of the iPod."

"More recently, I purchased an iPhone 4G and was again excited about my new product. Just like with the iPod, I wanted to dock the iPhone on my speaker dock to listen to music. I had received an iPhone Bumper (because of reception issues) and had it on my iPhone. Unfortunately I could not dock it because the Bumper case is so tight and reduces the area around the 30 pin connector on the bottom of my iPhone."

"I had to remove the Bumper in order to dock to the speakers. I recently replace the Bumper with an OtterBox case but ran into the same problem that I had with the Bumper (the iPhone dock area is reduced) so I had to remove the case (which is a real pain). "I was so happy to find the DockExtender Boost - it definitely solved my docking issues and I am a very satisfied customer!" -M. Lam

Why GadgetBoost.com created this product:

GadgetBoost.com discovered from customers and on message boards that there were many users struggling with the same issue and there were some products newly available but none of them worked with the iPhone Bumper on.

Please visit GadgetBoost.com, to see this exciting new product along with our vast selection of accessories for your favorite device.

According to the announcement, the company stated that it will focus on providing three types of services, namely Technical Services, Technical Hiring and Sales Hiring.

ZNet stated that technical services will include Server Administration, Initial Server Setup, Server Monitoring, Server Backup and VPS Administration. The technical and sales hiring will be provided for three levels - Level 1, Level 2 and Level 3 with each level personnel competent in providing a specific level of technical/sales services.

"To excel in providing technological/sales manpower solutions" ZNet Technologies CEO Munesh Jadoun said in a statement, "ZNetsupport will serve as an experienced support partner for web hosting companies. Our 10+ yrs experience in web hosting industry gives us the competencies required for starting this new venture. We been the India’s fastest growing company is sure to replicate the same success for ZNetsupport too."

Talking about its manpower, the company stated that the rigorous hiring process provides them with the best manpower that is not just technically sound but professionally groomed too.  ZNetsupport.com differentiates itself from other support partners by offering experts with 2+ years of experience who gets trained on a continuum basis.

Holding its success in the Indian ground, by been ranked as 5th Best Local Search Company (India) for three consecutive months, the company has also launched various international ventures, ZNetlive been one of them and ZNetsupport.com been the next. 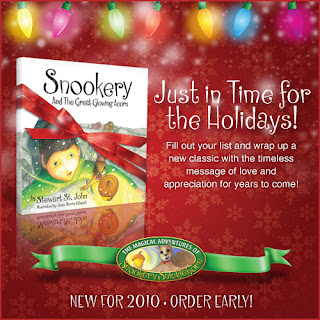 The award-winning children's television writer/director and visionary behind the Mighty Morphin Power Rangers wrote Snookery And The Great Glowing Acorn as a picture book aimed at teaching a new generation the "golden rules" through the magic and wonder of an inspirational talking squirrel, Snookery Snicklehorn.

"The golden rules are about treating ourselves and each other with respect," St. John said.

"They aren't so much rules as they are ways of being, things I learned growing up and something I wanted to impart to children growing up today."

Snookery And The Great Glowing Acorn is available directly from the web site SnookeryBookery.com -- http://www.snookerybookery.com -- or through Amazon.com. "We launched a really fun, interactive web site for kids to visit and parents to order the book through," said St. John.

"Snookery is a positive, furry chap who likes to takes naps," St. John explained about the story, the first in a planned series of books collectively called The Magical Adventures of Snookery Snicklehorn. "But one day he hears grumbling from the town below and discovers a young boy who's upset about being housebound on a snowy day. So he teaches the boy about the power of appreciation, and gives the child a whole new perspective on life as they embark on a magical journey together."

Snookery And The Great Glowing Acorn is seventy-six pages and filled with gorgeous illustrations by leading artist Joan Perrin-Falquet. Perrin-Falquet is well-known to inspirational audiences for her work with Louise L. Hay and Hay House on books, audio books, calendars and gifts.

"When Stewart asked me to illustrate his first picture book I was thrilled," said Perrin- Falquet, whose husband and twin boys were enraptured with the magical words of the book from day one. "I'd been wanting to work on a children's book for a very long time and the opportunity to work with Stewart was something I couldn't pass up."

St. John made the decision to publish the book through his publishing company St. John- Fisher Publications, a small independent publishing and packaging company whose focus is on creating content aimed at kids and family.

"Family entertainment is what I know best," said St. John, whose work has included children's animation, pioneering online and mobile content creation, as well as directing feature films and composing musical scores. "I'm a storyteller at my core. No matter what platform or technology is out there, I love to create and will keep going as long as I have life inside of me!"