Fractured Idols, by Kevin Austin, is a tale of Interior Designer Sebastian Cartwright as he emerges from the financial chaos of the Great Depression into a world still dominated by corporations. 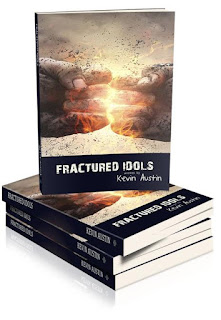 London, UK (October 8, 2015) -- Kevin Austin's Fractured Idols is a snapshot of the lives of wealthy Metropolitans who inhabit London's super-rich Royal Borough of Kensington and Chelsea. This is the world of Sebastian Cartwright, top International Interior Designer and friend of the great and the good. His larger-than-life chums include Magda, a glamorous Hungarian émigré, her lover Phillip, Viscount Brampton, scion of an Aristocratic English family and trusted confidant, Karim, a Moroccan Architect who commutes between Marrakesh and Amsterdam with his Dutch partner Christiaan.

But Sebastian Cartwright is angry. His career as an Interior Designer took a hit during the Credit Crunch in 2008 and has never recovered. He feels adrift in a world that has changed beyond his recognition; his whole being fractured. A classicist in style, his old-fashioned values have also suffered at the hands of what he feels to be a Media-led destruction of all he holds dear. His world-view, influenced by his innate Christianity, is affronted by the idolatry he sees around him.

Magda introduces him to Madeleine Armitage, an avaricious, antipodean corporate wife and Sebastian's life is turned upside down. His deep antipathy towards her is put aside during a weekend house party in rural Southern Spain where a significant person from his past appears and he is forced to confront a panoply of emotions buried deep in his soul.

A timely and humorous look at the issues of Big: Government, Banks, Media, and Religion, Fractured Idols reinvents a well-worn idiom: "Hell hath no fury like a Homosexual scorned".

Author Bio: Kevin Austin attended school and University in Perth, Western Australia before moving to London in 1987. Experience working in the City of London, Television Production, and as co-owner of a Boutique Hotel in Spain gave him the background for this, his first novel. He co-owns British Society Salon EQUUSHAIR with his partner Geoffrey and they live in Kensington with their Labrador Charlie.

Fractured Idols is the first of two parts. Goliath and the Kitten Factory will be published by First Edition in March 2016.