Execute Order, by Jett Ward, takes us inside the drone wars as a Reaper predator pilot who has become the prey. 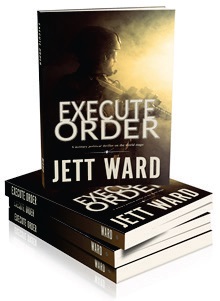 Port Orchard, WA, USA -- Jett Ward's Execute Order is an International thriller written within the technical sophistication of Tom Clancy and the precision marksmanship of Vince Flynn novels. Spanning the dark mafia underworld of Las Vegas to the murky Special Operation battlegrounds of the Middle East-this novel does not stop until the very last page.

Reaper pilot, Brent Parker, receives an execute order to kill the number one terrorist on the U.S. High Value Target list. With the CIA declaring open season on terrorist around the world, the aftermath places him in the cross hairs of the Iranian IRGC.

After a U.S. Navy strike, Parker soon becomes a target by his own government when he is unable to stop insurgents from taking anti-aircraft missiles from a destroyed Benghazi Military Compound. Now an F/A-18 fighter has been shot down over hostile ISIS territory and a government conspiracy mounts to hide an international scandal that involves an execute order against an American aviator. When a Special Forces team is sent on a suicide mission to eliminate the Navy pilot before he becomes captured, Parker is forced to make a tough decision that will cost him his freedom. With a government conspiracy closing in and a Quds agent hunting him down, his past propels him to escape the confines of his prison and become the hunter against those who seek to destroy him.

"This book is hard to put down right from the opening pages. The author did a great job interweaving the subplots into the main plot and tying it all together at the end."

"The action scenes were very well written and they made me feel I was right there."

Author Jett Ward is a former naval aviator and Desert Storm combat veteran flying A6 Intruders. As the Air Director for controlling close air support missions abroad, he orchestrated the precision strike of airpower within the murky world of Special Forces ground operations. He is a graduate of Air War College, and holds Master of Business Administration and Master of Science degrees. He and his wife live in the Pacific Northwest.