Ann Lee, What the U.S. Can Learn from China, at Golden Networking's China Leaders Forum 2012

New York City, NY, USA (November 16, 2012) -- Ann Lee, author of What the U.S. Can Learn from China, will speak at Golden Networking's China Leaders Forum 2012, "Political and Economic Challenges for Xi Jinping, China's President-in-waiting", December 7th, New York City, conference that will examine the political and economic challenges facing China nowadays and the long-term opportunities that will be created in the world's largest economy by 2016.

Professor Lee focuses on issues of global economics, finance, and U.S.-China relations. A former investment banker and hedge fund partner, she is a frequent media commentator on economic issues. In addition to television and radio appearances on MSNBC, Bloomberg, ABC, CBS, CNN, CNBC, Fox Business, and NPR, her op-eds have appeared in such publications as The New York Times,The Financial Times, The Wall Street Journal, Newsweek, Businessweek, Forbes, Harvard Business Review, The American Prospect, and The American Banker.

While she was teaching at Peking University, she also acted as an economic adviser to Chinese economic officials as well as to several large Chinese asset management firms. She was educated at U.C. Berkeley, Princeton University's Woodrow Wilson School of International Affairs, and Harvard Business School.

China Leaders Forum 2012 will provide attendees with the responses to the above-mentioned questions and the most up-to-date review of where the Asian giant stands and the challenges and opportunities for businessmen looking to expand their business with China when others only see growth contraction. Recognized experts, regulators, and strategists, will return to China Leaders Forum 2012 in its fourth edition to provide the information practitioners are looking for in an open and unbiased environment, highly conducive to the most efficient and effective networking: 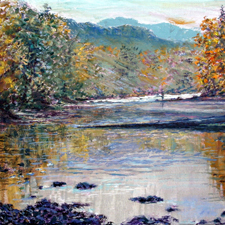 Jupiter, Florida, USA - November 16, 2012 -- Light Space & Time Online Art Gallery (LST) is very pleased to announce that fine art painter Stephen Dobson is now the gallery's featured artist and he will be presented in the Light Space & Time's Artist Showcase for the next 30 days.

Stephen Dobson was originally born in Manchester, England prior to immigrating to Canada at a young age and is a self-taught artist who loves painting. He is a very prolific artist who developed a signature style early in his career and was invited to join the Stave Falls Artist Group becoming one of the original members in the group.

Stephen works primarily with oil paints, striving to find light and color using confident brushwork and commonly uses pallet knives and his fingers while painting. He always tries to express his feelings about what he paints and hopes to bring the observer closer to his thoughts about the people, places and things he observes in his daily life and especially in the way people interact with each other and their surroundings.

Stephen has had all of his submitted works accepted by the American Art Awards and has won a number of 1st and 3rd place awards in a variety of Painting categories for the last three years. This is a competition open to all artists from around the world and is juried by 25 well respected galleries, across the United States.

Stephen enjoys travelling throughout the area he lives in Southern British Columbia and especially the City of Vancouver and the Upper and Lower Fraser Valley where he always discovers something fresh to paint. Stephen's original paintings can be viewed in his home studio located in Mission, British Columbia. His work is held in a number of private collections throughout Canada, the United States and Europe. His website is http://www.stephendobson.com.

Light Space & Time Online Art Gallery conducts monthly art competitions and monthly art exhibitions for new and emerging artists on a worldwide basis. It is Light Space & Time’s intention to showcase this incredible talent in a series of monthly themed art competitions and art exhibitions by marketing and displaying the exceptional abilities of these worldwide artists.

The art gallery website can be viewed here: http://www.lightspacetime.com

NextPlane Takes the Pain out of Federating Microsoft OCS/Lync and IBM Sametime platforms with Google.

SUNNYVALE, Calif. (November 16, 2012) -- NextPlane, Inc., the market leader in cloud-based federation services for unified communications (UC), is now offering free Google federation to organizations using Microsoft OCS, Microsoft Lync, or IBM Sametime. NextPlane shortens the time it takes to setup federation with Google to less than a day, and eliminates the hassle of installing and configuring an XMPP gateway. NextPlane's cloud-based service does not require any on-premise hardware or software component.

Unlike using XMPP gateways from Microsoft or IBM, end-users benefit from a richer feature set, such as presence, and enhanced presence (custom presence states and activity-based presence). Moreover, IT organizations benefit from greater reliability and scalability, access to usage reports, and 24/7 service availability with no hidden costs. Google federation is being offered as part of free membership in UC Exchange, a cloud-based UC federation service that allows members to find, connect, and collaborate with other federation-ready organizations. Companies who upgrade to a paid subscription to the NextPlane UC Exchange federation service can access additional features including voice and video federation with Google (a feature unique to NextPlane), and federation with other UC platforms, social media, and Skype.

"Our free Google federation for organizations with a Microsoft or IBM unified communications platform gives users a significantly better real time collaboration experience." said Farzin Shahidi, founder and CEO of NextPlane. "By using NextPlane UC Exchange IT departments can go beyond the serious limitations of Inter-vendor UC interoperability solutions which are not being addressed by UC vendors."

For more information, visit http://www.nextplane.net/get-started.php or contact sales at sales@nextplane.net.

A recent article from GreenWorld BVI, calling for gold investors to supplement their portfolios with agriculture and forestry investment, has been endorsed by FRA.

Seattle, United States, November 16, 2012 -- A recent article from GreenWorld BVI, calling for gold investors to supplement their portfolios with agriculture and forestry investment, has been endorsed by Forestry Research Associates (FRA).

The main reason that GreenWorld gives for diversifying away from solely gold investment included the fact that gold does not pay an income until it is sold. It is also a "faith-based investment", as GeernWorld explained: "Gold is largely an economically unproductive asset."

Agriculture and forestry are alternative asset classes, as gold is, and they also tend to keep their value during times of economic turmoil and offer a buffer against inflation, like gold. However, through investing in managed forestry and agriculture projects, investors can also enjoy regular incomes. An example is the projects run by Greenwood Management in Brazil, claims FRA.

These projects are intended to offer mid-to long-term investment options for those who want to buy up their own piece of sustainable forestry. Through working with Greenwood Management, investors enjoy the benefits of having their own managed forest land, while receiving income in the form of payouts when trees are harvested in a cyclical process. The timberland is managed to ensure there is new growth to replace mature trees that are cut down and sold. Trees that are sold generate returns for investors, who also enjoy a pay out when their investment reaches maturity.

Investing in forestry is a good option for any risk-averse investors who want to diversify their portfolio further. Spreading investment between several different asset classes offers good protection against risk and forestry is one of the most risk-averse assets. This is because timber simply carries on growing in size and value all the time, so if the market conditions aren't right when investors want to sell, they can simply hang on a little longer and sell a larger product at a higher price.

Forestry Research Associates is a research and advisory consultancy that focuses on forestry management, sustainability issues and forestry investment around the globe.

Moscow, Russia - November 16, 2012 -- URALCHEM HOLDING P.L.C. (hereinafter URALCHEM HOLDING or the Company), a Cypriot holding company of the URALCHEM Group (hereinafter called the Group), one of the largest producers of nitrogen and phosphate fertilisers in Russia, announced its unaudited IFRS financial results for the first nine months of 2012 ending 30 September 2012.


Dmitry Konyaev, CEO of URALCHEM, OJSC (part of the Group), commented on the results for the first nine months of 2012: "During nine months of this year the Company showed steady improvement of its financial performance compared to the results for the same period of 2011. To this contributed the acquisition earlier this year of another production unit, Minudobrenia, located in Perm and rising world prices for our main products, ammonia and urea. Looking back at the first nine months, we are optimistic about the full-year results for 2012."

During the third quarter of 2012, price dynamics for fertilizers and intermediate products were different.

Prices for ammonia in the third quarter showed a significant increase due to growing demand and limited supply. During these three months, the price level rose by $50 / t, and reached $650 / t FOB Port of Yuzhny by the end of September.

In the absence of a strongly marked trend, the urea market was characterized by high volatility. Prices have not shown any significant increase or noticeable reduction, remaining within the limits of $360 to $400 / t FOB the ports of the CIS.

The global market for phosphate fertilizers in the third quarter of 2012 showed low levels of activity. In September, there has been a downward trend in prices amid a lack of demand in South Asia (India, Pakistan).

Increased revenues contributed to the increase of cash generated from operations to US $472 million in the first nine months of 2012 rise, compared to US $330 million in the same period last year.

As at September 30, 2012 the Company's net debt amounted to US $945 million. The weighted average interest rate in the loan portfolio during the first nine months of 2012 comprised 5.8% per annum compared to 7.9% in the same period last year.

For more information, please visit the company web site http://www.uralchem.com or use the following contact information: