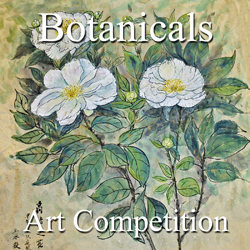 Jupiter, FL, USA (September 24, 2015) -- Light Space & Time Online Art Gallery announces their 5th Annual "Botanicals" Online Art Competition for the month of October 2015. 2D and 3D artists (including photography) from around the world are called upon to make online submissions for possible inclusion into the Gallery's November 2015 online group exhibition. The gallery encourages entries from artists, regardless of where they reside to apply to this competition by submitting their best Botanical and Floral art. Botanical art will include flowers, herbs, leaves and plants.

A group exhibition of the top ten finalists will be held online at the Light Space & Time Online Art Gallery during the month of November 2015. Awards will be for 1st through 5th places. Also, 5 Honorable Mention places will be awarded. In addition, depending on the amount and the quality of the entries, Special Merit and Special Recognition awards will also be given as well. The submission process and the deadline will end on October 27, 2015.

Winning artists of the "Botanicals" Art Exhibition will receive extensive worldwide publicity in the form of email marketing, 70+ press release announcements, 75+ event announcement posts, extensive social media marketing and distribution, in order to make the art world aware of the art exhibition and in particular, the artist's accomplishments. In addition, artists shall also receive a digital Award Certificate, Award Ribbon, Event Postcard, Event Catalogue, Press Releases and "Leveraging Your Success" marketing materials if they place in this exhibition.

Interested artists should provide the gallery with your best Botanical and Floral art now or before the October 27, 2015 deadline. For more information and instruction on how to apply online, here is the link http://www.lightspacetime.com.

Swiss Recipe To Happiness, by Stephan Bosshard, is his story of becoming King, "Pretzel King" that is, and his recipe for success and happiness. 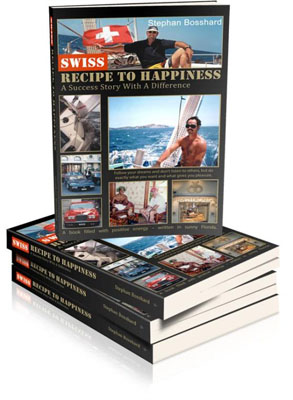 Miami, FL, USA (September 24, 2015) -- Stephan Bosshard's Swiss Recipe To Happiness is the story of a Swiss businessman who thought he had fulfilled his dreams, but then realized that on the way, he had lost sight of his real goals. He let go of what he had achieved, sold his company and regained what he had lost: his freedom. His autobiography, which reads like a suspenseful novel, is a great success story with heart and soul. And he has found the recipe to happiness. - The man is Stephan Bosshard

Although Stephan Bosshard was born (on August 6, 1960) and raised in Switzerland, it wouldn't be quite appropriate to call him the typical Swiss.

Due to his not exactly carefree childhood, he took his life into his own hands quite early and began to dream of true happiness.

He found it - not where one might expect, in his success and wealth, but in the subtleties of daily life. He learned from experience that true happiness consists of love, leisure time and good health. On the zenith of his career - around the turn of the Millennium - he decided to let go. He sold his life's work, the famous "Pretzel King" business, at a profit. For the time being, that spelled a Happy End to his earlier chase after happiness.

Today, Bosshard lives a happy, contented life - with his wife and their dog GIGI - away from any common daily routine, in Switzerland and on his yacht in Florida. He is convinced that on the way he has found his "Recipe for Happiness".

Swiss Recipe to Happiness, is a great read, the author did not get over descriptive keeping with a good page turning pace. This simple entrepreneur lived his life to its fullest and worked his butt off to enjoy his success A simple yet, riveting account of his very spontaneous and exciting movements in his business and his travels around the globe. Fun and uplifting in every way. ~Keith Maling Amazon 5 Star Review

A Wild Spring in Yellowstone, by R. E. Janet, takes you on a photographic adventure into the wild and wonderful experience that is Yellowstone. 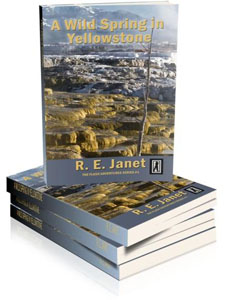 Lafayette, LA, USA (September 24, 2015) -- R. E. Janet's A Wild Spring in Yellowstone - The Flash Adventures Series, #1 follows John and his Labrador Retriever, Belle, into Yellowstone National Park whose many natural wonders and a few possible dangers can make for a thrilling adventure.

John is thrilled to be out west. He can't wait to see the sights, hike the trails, and take pictures with his new camera. But on their first day in the park, everything changes in a flash. What happened?

John and Belle find out really quick that they aren't alone. The beauty of this park has a dangerous side too. And what is up with this camera? Can they make it back safely, with the park teeming with wild animals? But how? What will they find...or...what will find them?

Back in 2008, I visited my first national park and became absolutely hooked! Since then, I've traveled to many national parks in the United States. I hope to see them all one day!

My family and I love to spend time outdoors and enjoy watching nature change with each passing season. I took up photography along the way, and now, I always have my camera ready. Because of our love of nature and the national parks, I became inspired to create The Flash Adventures Series. I hope you enjoy John and Belle's adventures as they find out where photography will take them! Enjoy the Journey! R. E. Janet

I must say I enjoyed reading this it was an easy read and one that I would read again. ~Sean Talbot

A good book for children who are beginning to read chapter books. It gives just enough information about Yellowstone National Park to keep their interest without being dull or too overwhelming for them. ~Librarian at York County Public Library