Love: A Story -- The Little Book That Reveals The Big Secret Of Love, Life And Fulfilling Your Dreams 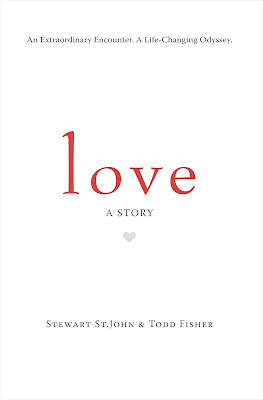 Beverly Hills, CA, February 14, 2011 -- Award-winning screenwriter Stewart St. John and producing partner Todd Fisher announced today the official release of their first co-authored book, “Love: A Story” --  the extraordinary tale of a disillusioned woman whose decision to end her life is interrupted by a mystical encounter with a familiar stranger.

“It’s about a woman who reaches the point in her life that she just wants out,” says St. John, known for his work as a screenwriter of children and family television shows like Seventeen Again and Sabrina: The Animated Series.  “And on the day she decides to check out, she has a transcendental experience that shifts her perspective and sets her on a journey of self-discovery. It’s a simple yet high concept story with a mystical element that is both enchanting and poignant.”

“It’s a story that really has something powerful to say about the human spirit,” says co-author Todd Fisher. “It’s a parable for living with courage, for living with strength and knowing that we are all loved unconditionally.”

The book is available now at Get The Love Book -- http://www.getthelovebook.com and Amazon.com.

“We also wanted to create something unique in the design of the book so there are love quotes throughout,” says Fisher who, with St. John, is co-founder of The St. John-Fisher Company, an independent media and publishing house creating television, film, books, music and apps for children and family audiences.

The authors know something about the subject of love. A few months ago they started sending out daily inspirations to subscribers of their feel-good website through emails called The Love Letters.

“The concept of The Love Letters is that they're written from the perspective of Love itself,” explains St. John. “Who doesn't want to start their day with a letter from Love, reminding you how awesome you are?”

“It went viral really fast,” says Fisher, “And what started with a few hundred daily emails has grown to several thousand... with no end in sight.”

Between Love: A Story -- which is the first book in a planned five-part series -- and the daily Love Letters, St. John and Fisher are busy building the love business. “It’s a lot of fun and it makes us smile because we know from the feedback that people are really enjoying what we're creating,” adds Fisher.

Love: A Story is currently available at the author’s web site: http://www.getthelovebook.com and at Amazon.com; to sign up for the love letters visit http://www.stewartstjohnlight.com

Melanie Garrett of Sacramento CA won the title of Miss Cougar Valentine on Saturday, February 12, 2011, at The Shark Club in Costa Mesa CA. Miss Garrett, 52, is the author of the forthcoming book, Ripening of a Woman. Miss Garrett won a free room at Hedonism II Resort & Spa at Negril Beach, Jamaica during International Cougar Week, March 27 - April 2, 2011. She will compete for the title of Miss Cougar International at the world-famous resort.

How did she win the title? “Personality, Charisma, and Perseverance,” says Miss Garrett, who was able to persuade many Cubs (younger men in attendance) to give her their gold coins (votes). “I know what I want and I go for it!” Miss Garrett is available for interviews by calling 415-507-9962 or emailing Rich Gosse at rich@richgosse.com.

The Convention was sponsored by The Society of Single Professionals, the world’s largest non-profit singles organization,. Anyone wishing more information about this and many more events and vacations for cougars may visit www.CougarEvents.com or call 415/507-9962. Anyone wishing more information about Hedonism II may visit www.HedonismResorts.com.