Biotage announces the addition of ChemMatrix® resins to its extensive offering of peptide synthesis and purification products. ChemMatrix offers substantial advantages over traditional PS and PEG based resins for solid phase peptide synthesis.

Charlotte, North Carolina, December 09, 2010 -- Biotage® (STO: BIOT), a leading supplier of tools and technology for analytical and medicinal chemistry, announced the addition of ChemMatrix® resins to its extensive offering of peptide synthesis and purification products. ChemMatrix is a patented 100% PEG resin from PCAS BioMatrix that offers substantial advantages over traditional PS and PEG based resins for solid phase peptide synthesis.

“Biotage is a leader in the global development of tools and technology for peptide synthesis and purification. Earlier this year, we introduced the SyroWave® peptide synthesizer, more recently Resolux™ HPLC columns for peptides purification and now ChemMatrix resins.” says Scott Carr, VP of Commercial Operations. “Biotage truly delivers a total solution to professionals in this growing area of science.”

The ChemMatrix resin is a technological tool enabling synthesis of complex molecules from biological origin, peptides, oligionucleotides and small proteins typically used for therapeutic purposes. This resin is supplied as classical spherical beads, a tried and tested solution in the industry for almost 50 years but leverages today’s need for flexibility and exacting standards of quality and performance in the synthesis of especially difficult sequences.

There are many benefits to ChemMatrix, such as; exceptional stability, wide solvent compatibility, no leaching, optimum loading capacity allow users to achieve higher purities and yields of product, per gram of resin, especially in the case of difficult peptide sequences.

For more information regarding the complete line of Biotage products for peptide synthesis and purification, visit http://www.biotage.com/peptides.

About Biotage
Biotage offers solutions, knowledge and experience in the areas of analytical and medicinal chemistry. The customers include the world’s top pharma and biotech companies, as well as leading academic institutes. The company is headquartered in Uppsala, Sweden, and has offices in the United States, United Kingdom and Japan. Biotage has 245 employees and had sales of SEK 394,1m in 2009. Biotage is listed on the NASDAQ OMX Nordic Stock Exchange. Website: http://www.biotage.com
Posted by Star One Public Relations No comments:

Sydney, NSW, Dec 09, 2010 -- In keeping with its aim for high quality building and timber pest inspection services for its Sydney clients, Tyrrells Property Inspections has launched a new user-friendly website.

The new site allows clients to book inspections online through a simple contact form (even simpler if clients have previously booked inspections with Tyrrells), read the latest Tyrrells and building industry news, sign up to receive the Tyrrells newsletter and find out more about property purchase and building with Tyrrells’ helpful articles and blog.

The site, which was designed and built by Sydney web design firm Big Click, outlines the extensive list of Tyrrells’ property buying and building services, such as:

Co-founder Jerry Tyrrell says the new Tyrrells’ website is an important tool in the organisation’s strategy to keep at the top of property inspection services in NSW.

“When there is so much information available to the building industry and all inspections needed to comply with NSW laws people can feel overwhelmed, so we tried to collect all the relevant facts and data together in one place to make the process simple.

“We've worked hard over the past three decades to ensure Tyrrells is at the forefront of knowledge in property buying and building and our clients benefit from that knowledge every time we are commissioned to provide a property report,” he added.

Tyrrells is the only ISO accredited building consultancy in NSW, with property inspections conducted on residential and commercial properties and comprehensive reports available within 72 hours of booking.

Formed in 1983 by Jerry Tyrrell and Peter Ellis, Tyrrells has become known for providing independent property inspections, pest inspections and building reports by qualified building consultants who had technical qualifications, specialist training and extensive experience in building and/or timber pests.

For more information about Tyrrells’ services, visit www.Tyrrells.com or call 1300 131 270.

GREENSBORO, NC, December 09, 2010 -- According to the World Health Organization (WHO), approximately half the worlds’ population is at risk for Malaria. Many corporations within the oil and gas and mining industries, in particular, operate out of regions where insect-borne disease is one of the largest risks to employee health. Insect Shield repellent work wear offers vital protection against a variety of insects that can cause dangerous diseases such as malaria, dengue fever or Lyme disease.

The Insect Shield program is being offered to oil and gas, mining and forestry companies and their subcontractors in locations where insect-borne disease is endemic. Every day, thousands of these company’s employees are exposed to insects that can carry malaria, dengue fever, trypanosomiasis, filariasis, leishmaniasis, and other dangerous diseases.  Insect Shield’s long-lasting clothing treatment—proven to last through 70 washings—is an excellent solution for employees living in harm’s way.

The Insect Shield Workplace Safety & Health online store http://www.insectshield.com/work  makes protective clothing and gear items available to workers in at-risk locations across the globe. The Insect Shield assortment consists of work wear, professional apparel and accessories—including clothing that also offers sun protection, flame resistance and high visibility—as well as additional protective items such as mosquito nets for use at home. A Youth section was recently added to go a step further and help protect the families of employees who have been relocated to disease-risk parts of the world.

Haynes Griffin, Insect Shield CEO said, “We are excited about the potential for growth that this new market segment offers us, and we applaud the oil and gas, mining and forestry industries for their adoption of the technology and continued dedication to employee health protection. We believe that other companies will quickly recognize the benefits of our effective, convenient and durable insect-protection technology, and will integrate it into their own health and safety programs, alongside requirements such as steel-toed boots, hard hats, and fire-resistant and high-visibility clothing.”

The US Army has adopted permethrin treatment as part of its’ personal insect protection strategy. All deploying soldiers receive permethrin-treated uniforms currently, and by 2012 all soldier uniforms will be treated prior to being issued. Insect is an approved vendor of the US Army and US Marine Corps.

About Insect Shield Technology:
In July 2003, Insect Shield introduced the first EPA-registered insect-repellent apparel. Insect Shield® Repellent Apparel technology provides effective, invisible and odorless protection against mosquitoes, ticks, ants, flies, chiggers, and midges (no-see-ums) through 70 launderings. Insect Shield® Repellent Gear technology is proven to repel mosquitoes, ticks, flies, and fleas through six months of constant exposure to weathering (sun/rain). Insect Shield technology has the potential to be an important tool in the battle against insect-borne diseases and improve the health of people worldwide. In partnership with a number of agencies and international relief organizations, Insect Shield technology is being used for apparel and other items that people use daily to aid in protection against insects. For more information:  http://www.insectshield.com/work
http://www.insectshield.com
http://www.facebook.com/insectshield
http://www.twitter.com/insect_shield 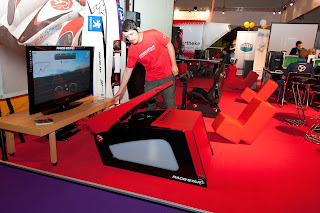 Zeltweg, Austria, December 09, 2010 -- The RACE-STAR ConverTTable transforms in no time from a coffee table into a full simulator cockpit! You can use it with your existing hi-fi system, PC, gaming console, or TV to game in your living room, and once you are finished playing it converts back into a coffee table again. Yes, the RACE-STAR ConverTTable was designed to conceal its true identity in everyday life. You have a centerpiece which will not only lend your room more atmosphere, but should also be attractive to both men and women who are particular about their furnishings!  The RACE-STAR ConverTTable also cuts a good figure in a hotel lobby or at a car dealership!

After more than three years of development, the RACE-STAR ConverTTable is finally ready for production!

It was decided to further develop this product both technically and optically with the highest quality standards. An important recent development was the collaboration with our  Simracing Team RACE-STAR ConverTTable, to prepare it for professional racing on the virtual circuits! 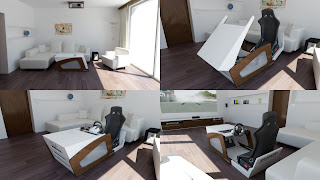 Premiere at Gamescom 2010 in Cologne

The RACE-STAR ConverTTable was presented first to the public at Gamescom in Cologne, Europe’s largest trade fair! At the fair there was the first opportunity for a thrilling test drive!

Available as a production or Custom model!

The production model of the RACESTAR ConverTTable is built with a robust plastic coating which is available in 2 color combinations: black/red or white/wood. High wear areas, including the floor and the pedal bracket, are all made with a durable black plastic coating. The RACE-STAR ConverTTable production model is now available at for the price of €4,999.00 including VAT.

Do you want an even higher quality product? Then choose the Custom model, which is available in any painted color! Hemi orange, Ferrari red, british racing green or matt black? No problem, your wish is our command! In addition you may choose from a wide selection of side windows, as well as the option of real wood side panels.

The RACE-STAR ConverTTable Custom represents the highest possible quality in gaming cockpits! With this product we are also able to cater to unusual requests, such as giving the exterior a granite or metal appearance. We can even build a self-folding version if desired!

Since each RACE-STAR ConverTTable Custom is unique, pricing is available only upon request at!

About RACE-STAR
RACE-STAR, based in Remscheid Germany, develops and sells racing simulation products, including sophisticated complete solutions. Founded in the year 2000 as a real racing company, (Ferrari Challenge) it took up the sales and distribution of the RACE-STAR simulator in 2002. Since then it has been very successful in developing the RACE-STAR brand. Simulator products for the consumer sector have followed, as well as the further development of the RACE-STAR model MOTION with motion simulation. The RACE-STAR ConverTTable, a development of RACE-STAR Austria http://www.race-star.at, which was conceived as a designer simulator, now completes the product range.