Calgary, Alberta (July 3, 2015) -- EDGE Science Fiction and Fantasy Publishing are delighted to announce the release of the first book under the new e-Book imprint, EDGE-Lite. 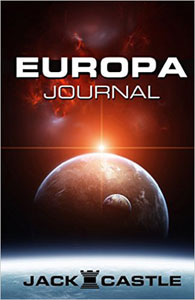 And read the first chapter (Chapter One) of the book: http://edgewebsite.com/books/europajournal/chapter-one.html

About the Novel (Europa Journal):

On 5 December 1945, five TBM Avenger bombers embarked on a training mission off the coast of Florida and mysteriously vanish without a trace in the Bermuda Triangle.

A PBY search and rescue plane with thirteen crewmen aboard sets out to find the Avengers... and never returns.

In 2168, a mysterious five-sided pyramid is discovered on the ocean floor of Jupiter's icy moon, Europa. Commander Mac O'Bryant and her team of astronauts are among the first to enter the pyramid's central chamber. They find the body of a missing World War II pilot, whose hands clutch a journal detailing what happened to him after he and his crew were abducted by aliens and taken to a place with no recognizable stars. As the pyramid walls begin to collapse around Mac and her team, their names mysteriously appear within its pages and they find themselves lost on an alien world.

Stranded with no way home, Mac decides to retrace the pilot's steps. She never expects to find the man alive. And if the man has yet to die, what does that mean for her and the rest of her crew?

Jack Castle loves adventure. He has traveled the globe as a professional stuntman for stage, film, and television. While working for Universal Studios, he met Cinderella at Walt Disney World and they were soon married. After moving to Alaska, he worked as a tour guide, police officer, Criminal Justice professor, and certified weapons instructor. He has been stationed on a remote island in the Aleutians as a Response Team Commander and his last job in the Arctic Circle was protecting engineers from ravenous polar bears. He has had several Alaska adventure stories published along with articles in international security periodicals. Europa Journal is his first science fiction novel.

For further information, e-review copies, or to book interviews with the author please contact: