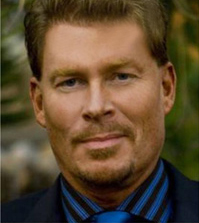 SAN DIEGO, CA, May 08, 2011 -- Not many people knew it at the time, but during the Reagan Administration, there were a few close-calls that could have caused an all out nuclear war between the then Soviet Union and the United States. On one occasion, in 1983, the Soviets mistook a NATO post exercise as the real thing, triggering a ready response that almost ended in all-out-war.

These events became public a few years later and caused some concern for people like Jim Lawlor, (see bio at: http://www.pbmillionairebio.com) who, at the time was living in Iowa, had recently graduated from college and was starting up a new business. Lawlor is known locally as the “PB Millionaire” - his character name on a new TV show now in production here in Pacific Beach.
In the late 1980’s, a new leader for the Soviet Union, Mikhail Gorbachev, appeared on the scene and was breath of fresh air for some like Lawlor, who liked the new direction he was taking towards bettering relations between the two super powers. Lawlor was frustrated, however, by the way the US was dragging its heels in response to Gorbachev’s peace rhetoric. He felt the US needed to take advantage of the opportunity presented by Gorbachev. But Lawlor knew he had little political influence as a mere private citizen. So in December of 1988, Lawlor came up with an idea that would get the attention of political leaders. He decided to build what he later called “a super-sized Christmas card from one super power to another.” The idea took on a life of its own and suddenly Lawlor was making national headlines, appearing on all the major networks, The Today Show, CNN, and Fox News.
(See Video: http://www.youtube.com/watch?v=sRmbH2dPZIU)
It later became known as the “peace card” and it was signed by hundreds of thousands of US citizens and even some important government officials. Lawlor convinced Iowa Governor Terry Branstad to sign the peace card, as well as Iowa Senators; Tom Harkin and Charles Grassley, and the entire Iowa delegation of the US Congress. Lawlor also persuaded other US senators, congressmen and state governors to sign the card, including then Governor Bill Clinton of Arkansas. He then took his giant peace card on tour across the US, collecting signatures along the way, ending up in New York City, where he was greeted by Mayor Ed Koch and a host of celebrities – including Yoko Ono and her son Sean Lennon. Lawlor finally took the card to Moscow and presented it to the Soviet people on Russian television. He was treated like a US diplomat while in Moscow, even though he was only there as a private citizen.
When the project was over, Lawlor went back to Iowa where he was regarded as a hero. Some even suggested that he be awarded the Nobel Peace Prize for what he had accomplished.
Lawlor moved to San Diego in 1991, where he continued to build his business - manufacturing his invention of spray painting goggles. He went from living in his car to living in a castle here in Pacific Beach. He is now the star of a new reality show based on his new lifestyle as a self-made-millionaire. The “PB Reality Show” (http://www.pbreality.com), as it’s called, is scheduled to release next year.
Contact:
Liza
PB Reality Show
841 Turquoise St., Suite E
San Diego, CA 92109
Tel: 858 750-9805
E-Mail: pbreality@gmail.com
Web: http://www.pbreality.com
Posted by Star One Public Relations