Lake Forest, IL, January 11, 2011 -- Rock-and-roll pioneer Buddy Holly was just a kid from Lubbock, Texas, sporting black horn-rimmed glasses. Now, more than five decades after his tragic death, he and his music still affect lives around the world. The Iowa plane crash that killed him, The Big Bopper, and Richie Valens in 1959 is one of the most memorable plane crashes in history.

Gary W. Moore, the award-winning author of Playing with the Enemy, was born in 1954 but was not a fan of rock music. He knew nothing of Buddy Holly until he attended a tribute to him and his music by musician John Mueller in 2009. He was moved by the performance and astonished to learn that thousands of people of all ages around the globe are dedicated fans.

Hey Buddy: In Pursuit of Buddy Holly, My New Buddy John, and My Lost Decade of Music is Gary Moore’s chronicle of his personal journey to discover more about Buddy’s talent and character, his influence on generations of rock musicians, and the times in which he lived. He interviews people who were there the day of the crash, Buddy’s personal friends and family members, celebrities, and current-day Buddy enthusiasts. Hey Buddy examines our culture and how the young man from Lubbock brought us from where we were five decades ago to where we are today.

Along the way Moore discovers new information about the doomed charter flight that took off in bad weather with an inexperienced 21-year-old pilot. Himself a pilot, Moore and an aviation crash expert recreate the short flight. They conclude that the National Transportation Safety Board should re-open the crash investigation based on claims from the owners of the plane that the truth behind what happened that fateful night has never been told.

Hey Buddy: In Pursuit of Buddy Holly, My New Buddy John, and My Lost Decade of Music

Available at bookstores nationwide and online. 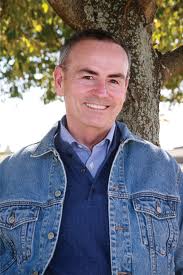 As author of Playing with the Enemy, Gary tells the story of his father, Gene Moore and his remarkable life in baseball and war. Playing with the Enemy will soon be a major motion picture. Gary is also a contributing author to the bestselling Chicken Soup for the Soul series and author of two upcoming books, Brimstone: The Dee Harper Story; and Carbon Hill.

Gary has been featured in publications such as Entrepreneur Magazine, Selling Power Magazine, Sales and Marketing Management Magazine, Impromptu Magazine, and Southwest Airlines’ Spirit Magazine, and has appeared on CNN, CNBC, ABC, NBC, CBS, and Fox.

Gary is a recipient of the prestigious Sam Walton Leadership Award and because of his unique speaking and writing style, has become known as “America’s Storyteller!”™

What People Are Saying

“Hey Buddy is a page-turning pursuit of Buddy Holly’s legacy and his impact on others in and out of the music industry. It’s as American as apple pie and as compelling as Don McLean’s legendary hit about The Day the Music Died. Run, don't walk, to your nearest bookstore and get two copies—one for you and another for anyone you know who listens to music.”
— James Riordan, New York Times bestselling author of Break on Through: The Life and Death of Jim Morrison

“Gary Moore’s Hey Buddy is a touching narrative that chronicles his fascinating journey of discovery into the life and music of Buddy Holly through the spirited performances of John Mueller while endeavoring to explain the profound impact Buddy’s musical legacy continues to have more than fifty years after his tragic demise.”
— Jacqueline A. Bober, Curator, The Buddy Holly Center

“Hey Buddy illustrates the raw power that passion for a topic can have when it grips an unsuspecting writer.”
— Bonnie Bartel Latino, author and former columnist for Stars and Stripes newspaper–Europe
Media review copies, ebook, high resolution photographs and interviews available upon request.

San Diego, CA USA, January 11, 2011 -- Green-Employers.com the job board that specializes in helping environmentally aware companies connect with like-minded job candidates, is the also one of the web’s leaders in delivering local job opportunities through newspaper partners nationwide.

“Plenty of large job boards have national opportunities but we have specialized at the local level. Everything from full and part-time jobs in a wide variety of careers and even work from home positions are available,” noted Sela Rodriguez, VP.

“Additionally our employers and job candidates are interested in green jobs with green companies. Employers are recognizing that to be good stewards of the environment you need to have staff that also share the same values.” Rodriguez added.

Green-Employers.com is also a great place for companies to market and brand their interest in the environment. If protecting our natural resources is important to a candidate, they are more likely to seek employment with a company that is engaged in energy conservation and environmental protection.

Companies can post their jobs at a very low rate of $45 per position and unlimited packages are available starting at only $995.

Candidates can search jobs and/or post their resumes for free. There is never a charge for job candidates on our website.

Green-Employers.com joins it’s partner websites http://www.IHireVeterans.com and http://www.Diversity-job.com in providing career opportunities to veterans, returning military and their families and offering a level playing field for all candidates to compete regardless of race, ethnicity, religion, gender, ability or sexual orientation.