Prolific Author-Philosopher Notes that the Way Forward Embraces the Abundant Synergy of Man and Woman Balance. 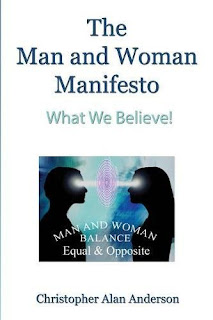 Las Vegas, NV, USA -- In his new treatise, author and philosopher Christopher Alan Anderson offers an educational writing that points to a different direction for our collective lives. In these turbulent times, with mankind and Planet Earth at a turning point, he asks, "What is the actual foundation we can base life upon?"

The Man and Woman Manifesto: What We Believe! answers this question, presenting a paradigm shift into Man and Woman Balance, a system of understanding the universe in terms of the fundamental polarities of maleness and femaleness and the balance thereof.

In an era in which it is clear our past and current religious and political structures have failed us, Anderson notes that many are confused about which way to turn. He comments, "We are being offered a sexual progressivism through L, G, B, T, Q as well as an existential threat in Islamic radicalism. In the meantime, our own constitutional system of governance and Christian roots seem to comprise a history, so what is the way forward? How are we to move ahead without a foundation based on life itself?"

The Man and Woman Manifesto: What We Believe! asserts that life is the only state of existence between male and female and that love is its one expression. The author further suggests that their every moment/touch is a spiritual resurrection/rebirth. In other words, procreation is not just physical in nature but spiritual as well. With this understanding, concludes Anderson, we may truly "love ye one another."

He explains, "Love is a good place from which to begin the life endeavor, as Man and Woman Balance can only be an expression of love." In short, "Man and woman can only love each other, now and forever," so might not this living reality, both on an individual basis and within the world at large, be the actual foundation from which we can live together?

Anderson cautions, "This is not an easy book, but if you can capture and live its essence, your life will forevermore have purpose."

About the Author: Christopher Alan Anderson received the basis of his education from the University of Science and Philosophy, Swannanoa, Waynesboro, Virginia. He resides in the transcendental/romantic tradition, that vein of spiritual creativity of the philosopher and poet. His quest has been to define and express an eternal romantic reality from which a man and a woman can together stand in their differences and create a living universe of procreative love. Mr. Anderson began these writings in 1971. The first writings were published in 1985. When asked to describe their overall message, he responded, "Spiritual procreation. Mankind has yet to distinguish the two sexes on the spiritual level. In this failure lies the root of our problems and why we cannot yet touch the eternal together. The message of man and woman balance brings each of us together in love with our eternal other half right now."

Many building improvements and upgrade projects require new lighting to make the structure compliant with current building regulations, including fire, light, and safety codes. Rather than adopting a "one size fits all" approach, Fulham offers three FireHorse fluorescent units at 1400, 750, and 500 lumens. Fulham also offers a full line of TLED lamps to replace fluorescent ballasts, although the FireHorse CEC units can power many TLED lamps as well.

"Our distributor and contractor customers are looking to Fulham to help keep them compliant with changing energy efficiency regulations. With the release of the new FireHorse universal emergency ballasts we are offering a CEC-compliant ballast that can save energy in new installations as well," said Russ Sharer, Vice President of Global Marketing for Fulham. "Our FHEM16 emergency lights also are extremely popular because of their versatility, ease of installation, and low cost, and are now assured to meet Title 20 standards."

The FireHorse FHEM16 LED adjustable square head emergency lights comply with the CEC Title 20 specifications outlined for small-diameter directional lamps, including power consumption of 75 watts or less. They have a rated life of more than 25,000 hours and are equipped with ANSI-compliant or E26 base types. All FireHorse FHEM16 emergency lighting units feature a rechargeable Ni-Cd battery that delivers up to 90 minutes of emergency power. The units feature a universal mount with a pattern knockout in the back for J-box mounting and snap-fit assembly.

The traditional design of the FHEM16 series has made it one of Fulham's most popular products for emergency lighting. The unit comes factory installed with two 1.15W square LED heads. The units are dual voltage, operating at 120VAC or 277VAC. A remote capable version the FHEM16WRC, is also available. It that is compatible with FHEM10RH and FHEM16RH remote heads. Base units are available in white and black.

About Fulham
Fulham Co., Inc. is a leading global provider of intelligent, socially-conscious sustainable commercial lighting components and electronics for use in commercial general lighting, parking structure, signage, horticultural, UV and other applications. The company develops and manufactures a variety of award-winning LED and emergency products, as well as legacy products across multiple lighting platforms. Fulham sells its lighting solutions worldwide through original equipment manufacturers (OEMs) and electrical equipment distribution channels. Headquartered in Hawthorne, Calif., the company has sales and/or manufacturing facilities in the Netherlands, China, India and the UAE. For more information, visit http://www.fulham.com.