Fangs, Claws, and Camouflage: Zombie Problems, by Frances Applequist, introduces the seductive vampire leader Avianna and her fight against evil. 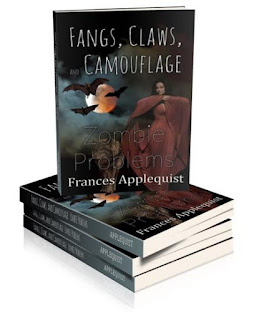 Raleigh, NC, USA -- Frances Applequist's Fangs, Claws, and Camouflage: Zombie Problems brings together vampires, werewolves, the US Marines, the militia and a powerful witch in a battle to save a town overrun by zombies.

The fight begins eight-hundred years earlier with the brave child who became a willful adult, and then the powerful and seductive vampire leader. While other humans hide, two frightened, but stubborn, coeds brave terrifying zombie hordes to document the truth.

"Fangs, Claws & Camouflage is an incredible story of supernatural creatures like Avianna and her companions who come to the aid of the humanity against hordes of beings bent on their destruction. A must read!!!" ~Mary Hartshorn (5 Star Review)

"Applequist's seemingly unlimited knowledge of military maneuvers and terminology make this an interesting read for the male audience while it has romance and a foreign influence for the female readers." ~E.C. (5 Star Review)

"The section of the book that described the actual zombie battle was a page turner..." ~AC