Ten Cents A Dance, by Fred Berri, takes us on a hunt for an obsessed serial killer with a strange biblical fascination. 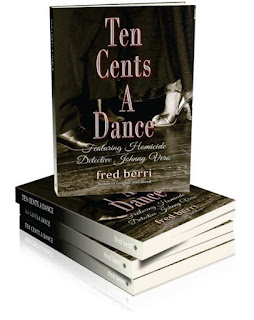 Homicide Detective, Johnny Vero, travels to France and works with Interpol to hunt a serial killer. The killer targets dance hall women who charge a fee of ten cents for a 3 minute spin on the dance floor. They story takes a bizarre turn when it is discovered they are murdered in the Budapest Hotel in certain room numbers which have biblical meanings. Why is the killer choosing these rooms? Detective Vero needs to find the answers before more women are killed.

I am so glad I found this author, fred berri. I will continue to follow him. I read his first novel, Cousins' Bad Blood which was intriguing and well developed as this new novel, Ten Cents a Dance, featuring a new character, homicide Detective Johnny Vero. The story moves and keeps you in suspense as Detective Vero faces the challenges of hunting this serial killer. I recommend this novel as I have his previous novel. I am glad I found a author I will follow as a fan of his writing. I hope there is a follow-up or a series. I recommend this as a must to your reading list. ~Michael Anthony

Fred Berri was born in the Bronx. He has lived many places and has had a diversified career, including owning his own business. Berri graduated Columbia State University with a business degree. Berri now lives in Florida where he retired after many years as a Financial Specialist and a top producer for one of the largest banking institutions in the U.S. During his career, he has been interviewed by newspaper reporters for his business, written many articles for trade publications as well as articles published for web based sites. Berri has done public speaking and has had the opportunity to be in a few T.V. commercials, including voice-overs. His published works are included in E-zine.com, ArticlesBase.com, GoArticles.com and Services magazine, a trade publication. Mr. Berri is the website creator and founder of http://www.retirementusa.com.