The Silver Mosaic, a Winston Churchill 1930s Thriller, by Michael McMenamin & Patrick McMenamin continues their award-winning series with a new, action-packed story of conspiracy and intrigue concerning the Jewish-inspired, world-wide boycott of German exports after the Nazis take power in early 1933. 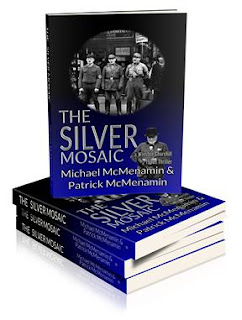 Cleveland, OH, USA -- In March 1933, the weak German economy is in peril. Winston Churchill wants to push it over the cliff with a boycott of German exports and take with it the new Nazi government whose brown-shirted SA thugs are terrorizing Germany's Jews.

The Nazis fight back and enlist two unlikely allies: the new US president Franklin Delano Roosevelt and the Jewish Authority in Palestine. FDR opposes the boycott because of the damage it will do to American investors if the Germany economy crashes. The Jewish Authority plans to sell out the boycott in exchange for the Nazis allowing German Jews to emigrate to Palestine with funds in excess of German currency controls. Nazi, Jewish and American MID agents then join forces to wage a deadly battle against Mattie and Çockran that takes them from New York to London, Paris, Berlin, Budapest, Prague, Copenhagen, and Stockholm.

Michael McMenamin is the author of the critically acclaimed Becoming Winston Churchill, The Untold Story of Young Winston and His American Mentor. His son Patrick McMenamin is an award-winning journalist who has produced stories for ABC News, Fox News and HuffPost. The first four novels in their 1930s era "Winston Churchill Thriller" series received a total of 14 literary awards. The Silver Mosaic is their fifth Winston Churchill Thriller and they are currently at work on their sixth, The Liebold Protocol.