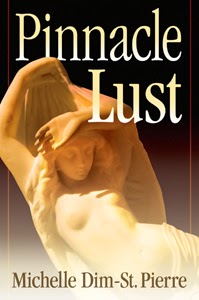 A native of Israel and a skilled medical professional, Michelle Dim-St. Pierre left her homeland for America to further her career in nursing, recently finding herself giving up her lifetime career to write her first novel, a stirring and unforgettable story of romance and intrigue.

Pinnacle Lust is scheduled to be released this month. This story takes place in Israel during Operation Desert Storm, where an illicit affair leads to great love, betrayal and an unregretful commitment.

Sharon Lapidot, is a beautiful young nurse who falls deeper and deeper into an affair with a married doctor. Her world is shattered by powerful and eroding mistakes, but her courage leads her to an unregretful commitment in a land far from home. It is only eighteen years later when her daughter discovers that the man who raised her is not her biological father.

In explaining her career shift from nurse to writer, Dim-St. Pierre says, "The nurse in me is sealed in my heart-it is me. I believe that the right time to change careers is when you reach the pinnacle. In my case it was even better, my nursing career inspired me to write."

The final push to write Pinnacle Lust came when the author was vacationing in Hawaii. "I wanted to read something that felt authentic and real... not a Cinderella story... I wanted more of a resemblance to real life in my reading material, so I decided to try my hand at writing such a story."

Besides the affair between nurse and doctor, Pinnacle Lust deals with:
• The power of love in a woman's life and the resilience of the human spirit.

• The real, raw emotions of an escalating affair - the duality of love and hate, lust and anger.
• The culture in Israel and how the Jewish religion factors into that with the dichotomy of the religious and the secular Jews.
• The effect of Operation Desert Storm on everyday life in Israel.

Dim-St. Pierre's nursing career, alongside her personal experience of having lived in Israel during Operation Desert Storm, is reflected in her writing.

Michelle wove many of those firsthand experiences into Pinnacle Lust which she says steers the reader to this truth: "Life doesn't always work out the way you want it to, but the human spirit is resilient and can survive and flourish given enough time. That love outlasts everything."

Pinnacle Lust has already earned much praise from top reviewers including:

"I was captivated."
-Amos Lassen,
reviewsbyAmosLassen.com

About Michelle Dim-St. Pierre
Born in Tel-Aviv, Michelle lived through four wars and served in the Israel Defense Forces for two years. She practiced for 32 years in the surgical field and health care administration. A full-time writer, she is a world traveler who enjoys cooking epicurean food. For more information, visit: http://www.michelledimstpierre.com.

Media Contact: For a review copy of Pinnacle Lust or to arrange an interview with Michelle Dim-St. Pierre contact Scott Lorenz, President of Westwind Communications Book Marketing, 734-667-2090 or scottlorenz@westwindcos.com or http://www.book-marketing-expert.com.
Posted by Star One Public Relations No comments: