A new eBook edition of The Parsifal Pursuit by Michael McMenamin & Patrick McMenamin continues the award-winning series of Winston Churchill Thrillers weaving history, intrigue, thrills and romance during the era leading up to World War II. The 2nd novel in the series, it was the 2011 Grand Prize Winner-Fiction in the Next Generation Indie Book Awards and also ForeWord Review's 2011 Thriller/Suspense Book of the Year. 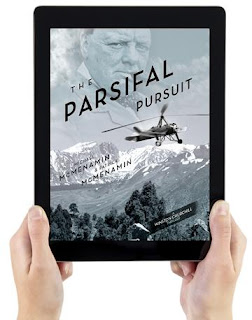 Cleveland, OH, USA -- In the spring of 1931 a conspiracy in Germany to assassinate President Hindenburg and elevate the Kaiser's son to the throne threatens the peace of Europe and sets off an epic quest to discover the secret hiding place of the Spear of Destiny, the lance which pierced the side of Christ. Kaiser Wilhelm II insists that the missing Spear-a talisman of bloodthirsty conquerors from Constantine to Frederick the Great-must be found and restored to his family.

Adolf Hitler also deeply reveres Frederick the Great and wants the Spear every bit as much as the Kaiser. So does Winston Churchill-growling in the political wilderness-who has gotten wind of the two German tyrants' obsession with the Spear and is determined to deny both of them a symbol that has led in the past to so much bloodshed.

Churchill enlists his Scottish goddaughter Mattie McGary, an adventure-seeking photojournalist for the Hearst media empire, to embark upon a quest to find the Spear and vindicate the vision of her late grail-scholar father. He also persuades law professor Bourke Cockran, Jr., a former military intelligence agent and Mattie's lover, to represent a US company in Germany targeted by a Nazi extortion racket in Munich.

Mattie's quest leads her to a mysterious villa in Egypt and then to a stronghold high in the Austrian Alps where she is in danger from religious fanatics sworn to protect the Spear as well as Hitler's SS and the ruthless leader of her own expedition who is both secretly working for the Kaiser and determined to seduce a vulnerable Mattie who mistakenly believes Cockran has left her for another woman. Learning that Mattie's life is in peril, Cockran mounts a desperate airborne mission to rescue the woman he loves.

Michael McMenamin is the author of the critically acclaimed Becoming Winston Churchill, The Untold Story of Young Winston and His American Mentor. His son Patrick McMenamin is an award-winning journalist who has produced stories for ABC News, Fox News, HuffPost and Buzzfeed.

The ebook version of The Parsifal Pursuit, a Winston Churchill Thriller ISBN 9781506905914, published by First Edition Design Publishing (http://www.firsteditiondesignpublishing.com), is available on-line wherever ebooks are sold.